The headline was bold with exclamation marks at the end. You couldn’t miss it even if you tried. “Two ladies marry one man at the same time!!”  In this age where polygamy is taking a battering even in traditional communities, a young man doing it with two ladies at once is something to behold. 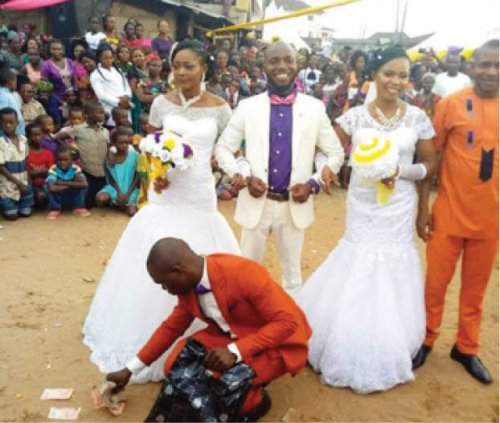 I rushed in to see the pictures of the ‘couple plus one‘ (or maybe ‘triple‘ would be the word to describe them). The man was young, in his prime and was all smiles.

The ladies, in their nice wedding gowns standing on either side of him, were easy on the eyes. They were not the type you’d think would find it difficult to attract any man they wanted. This begs the questions of why they agreed to this arrangement.

Looking at the man, if there was anything special or magical about him, he must be hiding it very well. It was clear he had just one head and the normal quota of limbs available to normal men.

So what was it about him that convinced these ladies to marry one man simultaneously? What words or skills did he use to convince them? And what role did mutual friends and family play in the whole drama?

The answers couldn’t be found in the story. So one is left to ponder this spectacle. In other words, speculations about what transpired between the three young people are all we are left with. 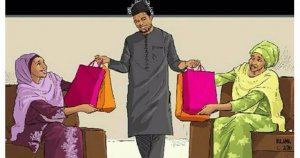 From his age, it is clear the man had never been married before. It is safe to assume that he didn’t give the idea much thought.

Sure, he must have sought advice from people and spend some nights thinking about this crucial step. But deep, serious thought? I don’t think so.

Married men would be the first to point out how hard it is to satisfy one woman. It is not even a matter of having enough money. Because money doesn’t teach a man how to handle somebody as complex as a woman in a relationship.

Whatever problem men get married to one woman, it increases exponentially when two women are involved in the relationship.

Even if he had a prior agreement with the ladies to address these problems, it won’t stop them coming up. Time and circumstance change people.

And it is as sure as dawn that one or both ladies would, sooner or later, begin to feel they are getting the short end of the deal.

Marriage is never a completely comfortable bed of roses. One can only assume he didn’t think of the painful thorns in the roses. Something must have convinced him he could pull this off. Whatever it is, he got served big time.

Whatever his magic formula is, one thing is for sure, he does have the mentality of a prime alpha male to be able to do this.

In all likelihood, the man did not start dating both girls at the same time. He must have fallen in love with one of them before starting things off with the other one.

So it is obvious that he cheated on one of the ladies first. This leads to the question of how the first girlfriend reacted the first time she found out about it.

What about the second girlfriend? Did she know he had a girlfriend before agreeing to date him? If she did, it means at one point, she accepted the fact that she is a side chick to the main girlfriend.

And perhaps, she even schemed to take him away from the first girlfriend.

There are so many questions to look at from different angles. That said, it says a lot about the character of both ladies that they allowed the situation to escalate to this point.

Where is the anger knowing your boyfriend cheated on you? How could he be forgiven when he didn’t stop? Doesn’t that show a serious case of low self-esteem if both of them could agree to wed an unrepentant cheat at the same time?

Some could argue that perhaps, the man must have been so good in bed both girls realized it needed more than one lady to satisfy his appetite in that department.

But making love outside marriage is one thing. Getting married because of that is a foolish decision. Many men have been led to perdition because of that. And women too.

I wouldn’t trust the judgment of a female who would take that sort of behavior from a man. Don’t let’s talk about even trusting her judgment as a mother and wife. 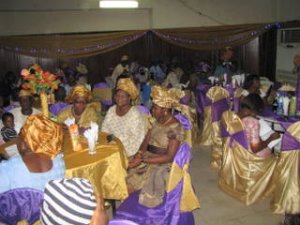 Looking at the wedding guests in the picture, I couldn’t help but think that most of them were either stupid or wicked or both.

Why didn’t any of them stop them from going ahead with this nonsense? Maybe there were extenuating circumstances. In that case, the circumstances must be extraordinary.

On the other hand, perhaps he was too strong-willed to listen to their advice. He simply went ahead and did his thing. That must make him a very determined man who gets what he wants even if the whole world is against him.

That notwithstanding, the smiles seemed out of place. The guests should be worried instead. Weren’t they witnessing a travesty? These young people are starting an important phase of their lives on the wrong footing.

There are so many issues here. But I would leave you to tell us what you think? What kind of advice would you have given the man to make him change his mind? Or how hard would you have objected to the whole idea?

Conversely, do you think there is nothing to be worried about?