In this article, we will be discussing the different types of facelift plastic surgery  procedure and what to expect in each of the procedures to give you an idea of what it entails before you decide to either embark or not embark on the exercise. See the different types below:

The majorities of less invasive facelift plastic surgery procedure usually entail less depression. These procedures commonly make use of sutures to draw up the SMAS. Less invasive procedures also make use of limited dissection and the degree of the incisions used.

Less invasive facelifts regularly imply roughly 3 to 5cm of the skin depression before and at the back of the ear.

Also, during these procedures, sutures are used to pull up the SMAS after skin depression, without profound lifting to the SMAS. The majorities of less invasive facelifts don’t usually interfere with the structure of the SMAS.

They usually leave it intact and make use of sutures to fold over the SMAS and make it shorter. The procedure usually helps to lift the facial features that individuals usually wished-for.

What the sutures do is to simply take the SMAS close to the most distant part of the dissection, fix and pull it to make the tissue that overbears the ear less mobile. This is what results in the lifting effect.

The incision is normally carried out on top of the sideburn followed by the area connecting the ear and the face. The cut can be done before or after the tragus after which it is extended to the front part of the earlobe. The tragus is a tissue fold that is located just before the ear canal.

Advanced facelifts usually involve an incision that runs at the back of the ear usually in a row with the fold which continues alongside the hairline or within it. As shown in the green dashed line in the figure above.

These types of facelift procedure usually result to a tighter neck. It is normally carried out to give the neck a complete lift. For a complete treatment of the neck, you will most likely need to undergo an incision as well under the chin.

Advanced facelifts require more forceful treatment of SMAS by lifting the SMAS and through an additional dissection below the SMAS. The SMAS is normally cut into and lifted with surgical equipment.

More convoluted facelifts extend the dissection under the SMAS to the muscles of the face and up to the smile muscles known as the minor and major zygomaticus muscles. You can refer to the figure below for these features

The dissection is normally extended to the smile muscles in order to be able to produce more effects on the nasolabial folds. This type of facelift procedure involves a very completed process that can only be carried out effectively by highly experienced and expert facelift surgical doctors.

The figure below shows this highly invasive facelift dissection into the major and minor zygomaticus. The figure carries the labeling of the smile muscles. The image shows the zygomaticus major of a facelift operation carried out by an expert cosmetic surgeon on a patient.

This form of facelift procedure is much more complicated and would normally result in complications if the procedure was done by a less experience surgeon.

The smile muscles are made up of significant facial nerve filaments underneath them that can hardly ever be found on top of these muscles which can be injured.

If what you want is this form of facelift procedure, you would require a surgeon who perfectly knows and understands this anatomy of the face. The surgeon must be a face and neck plastic surgery specialist.

The more conventional facelift procedures that are dune to lift the neck are also involves aggressive treatment of muscles of the neck below the chin area.

A good number of surgeons take neck treatment as a different procedure from face lift due to the fact that it takes up much more time be able to carry it out and have it completely and efficiently treated. 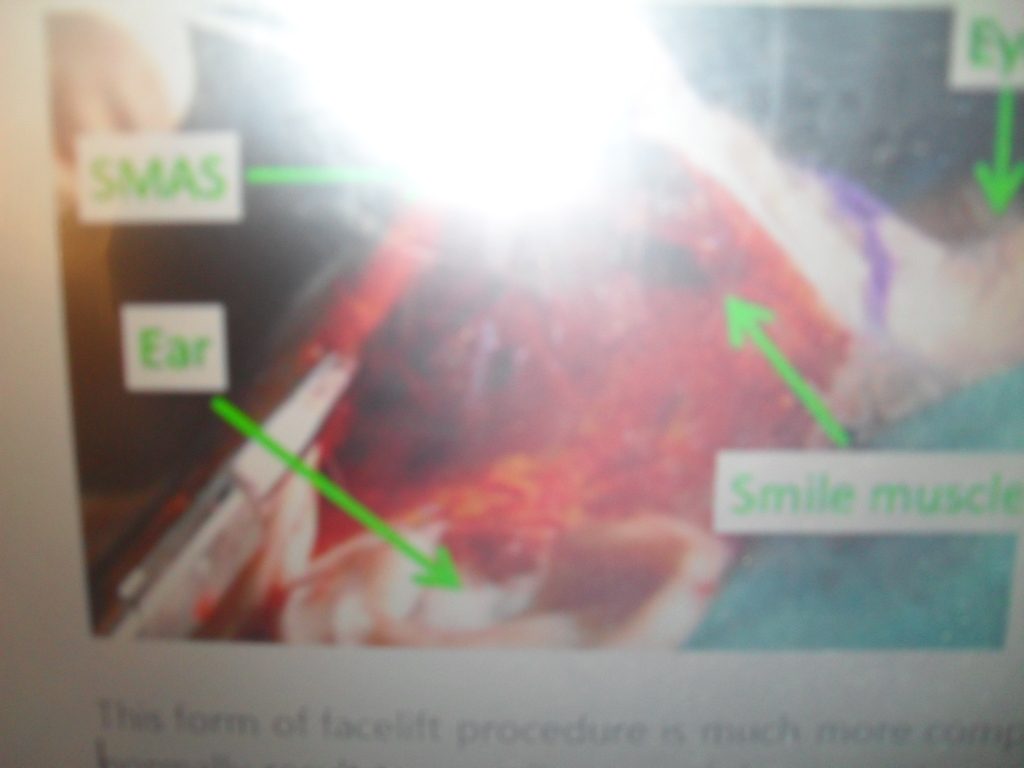 If you are interested in any type of face lift procedure, or you want to know more about the procedure, it is always advisable to make inquiries about qualified and experience surgeons in your area. You may also wish to ask him or her series of questions you have to get fully convinced that you are using the right person and that you are fully prepared to embrace the facelift procedure.