My Boss is Flirting With Me; Ways To Save Your Relationship And Career

Women are often the ones that mostly face this problem in their office although men too face it but not as much as what women really face in the office under their boss. If you’re engaged or probably you’re in a relationship but your boss is not letting you be, this article will really help you to get of such embarrassing situations. 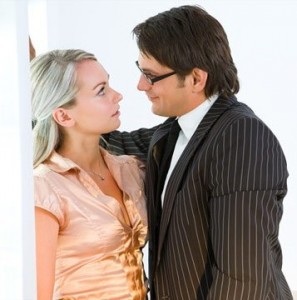 If your boss in interested in you, it often started with friendly gesture, compliment, a pat on the back, a jokey remark and all of that. Although not all men that try things like this really have such intent but being careful and not let your guard down can really help you.

When issues like this happen, what do you do to avoid the little too friendly act of your boss?

If this attention from your boss is making you uncomfortable, then let them know, telling them face to face that you’re interested in them professionally but not romantically will make the message clear.

If you don’t say anything, the attention is likely to persist or even increase as they test how far they need to go in order to get a clear response from you. I know it can be a difficult situation to face your boss but not letting your boss know could worsen your situation.

Women don’t like to cause offence and so hope the flirting is innocent or will go away. Silent is golden, keep quiet though and your silence or ‘shyness’ could even be taken as a sign of encouragement.

Take every opportunity to mention a partner whether you have or not.

When you’re off work especially during the weekend or a time off from work, don’t fail to mention how you enjoy the exotic time out with your man when you’re discussing in the office.

You can also tell that you partner birthday is on the way and seek their opinion on that to buy as gift for your partner. Make sure you said something enough to show that you’re in relationship with someone and the message will soon be clear to him.

To make it difficult for him if you know his or her family, always ask after their family, this will be very interesting if you have met their family before.

If your manager persists in coming on to you, try to reduce any opportunities for flirtation. For example, make sure any meetings take place in the office and aren’t scheduled at lunch time when it can be difficult to refuse coffee out or lunch in the pub.

Try to avoid situations where you know your boss is likely to flirt with you, for example if you’re both entertaining a client. If one-to-one meetings are a problem, try to book them in an open office setting or leave the door to the room open.

It can be hard to know how to react; especially when comments take you off guard, so have a plan of action ready for the next time something happens to make you feel uncomfortable. For example, if your boss sits too close to you, move away.

If he makes personal or suggestive comments, rather than laugh it off nervously (which he could take as encouragement), stare at him blankly and change the subject to something work related.

The relationship you have with your boss is the most important one you have at work – so of course you’ll want to handle the situation with care. If dropping hints hasn’t worked, you may need to spell it out another way.

To express your disapproval without condemning their behaviour outright, you could always say something like, “I make it a rule never to mix business with pleasure. I know you’re only joking, but sometimes I feel uncomfortable when you mess about.”

The Last Thing to Do If Your Boss Continue

If you’ve been made to feel uncomfortable on several occasions, consider keeping a written record; including the date, time, location, what was said and if there were witnesses. You should also keep a record of your actions to try and stop the harassment.

Hopefully you won’t need this, but should you decide to file a complaint, it will help make a case. If you’ve told your boss directly that you’re not interested and he continues to behave inappropriately, it’s time to look into your company’s sexual harassment policy. Don’t be afraid to talk with HR – you can ask for an informal chat to raise your concerns before you decide whether to file a complaint.

If your boss is behaving inappropriately with you, there’s a chance that he’s on record for having done something similar in the past.

My Boss is Flirting With Me is a serious issues in the office but with these 5 point outlines above, I strongly believed that your embarrassing situation in the office with your boss will be over.

While you’re likely to dress smartly for work anyway, dressing conservatively will help underline your professional status and avoid there being any mixed messages.

Remember this also, if you’re conversing with him or her and your boss took it to another level which you’re not comfortable with, you should then take the conversation straight back to work and ask for his professional advice on a current project.