The director M. Night Shyamalan and Gary Whitta wrote the screenplay for “After Earth,” but Will Smith wrote the story. He also stars in the movie, along with his son, Jaden, and the parental connection is not incidental. Though set millennia in the future, “After Earth” is very much about life today—an allegory of the transition from being a helicopter parent to a free-range one—and it introduces an impressive array of futuristic paraphernalia to make the point. 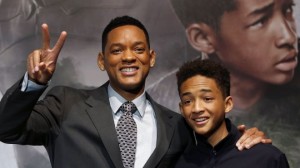 Will Smith may be one of Hollywood’s most bankable action stars, but his new film, “After Earth,” in which he stars with his 14-year-old son Jaden, has opened to cold reviews from critics and faces stiff competition in a busy box office weekend.

“After Earth” is a futuristic post-apocalyptic tale of a father and his teenage son in which the young boy must embark on a life-saving mission. [Must Read; Parental Guide in the Twenty First Century]

Sony Pictures Entertainment, a division of Sony Corp., spent about $130 million to produce the movie, making it one of the studio’s biggest summer releases.

The story is centered on the father-son relationship and the dynamic of a father passing the mantle to his son is mirrored both on screen and off, as the younger Smith leads the action.

Will Smith, 44, who wrote the initial story and was the executive producer of the film, said the project gave him valuable time to spend with his son, with whom he first starred in the 2006 family drama, “The Pursuit of Happiness.”

“Filmmaking and entertainment is our family business,” Smith said at a recent news conference. “So, it really gave us an opportunity for the last year to spend ten or twelve hours a day together, every day. And for me it’s just the best way, for me at least, to parent.”

Jaden Smith bears a strong resemblance to his famous father and won over most critics as the lead in 2010’s reboot of “The Karate Kid.” However, he has not been received as warmly for his performance as ranger Kitai Raige in “After Earth.”

Variety’s Scott Foundas said both father and son failed to meet expectations. “Senior Smith gives one of the least substantive performances of his career, while the undeniably charismatic Jaden toggles between … paralyzing fear and simmering rage.”

Manohla Dargis wrote in the New York Times that the younger Smith was “a pretty teenager with jumpy eyebrows whose character remains an insufferable brat.”

Rolling Stone’s Peter Travers slammed the script as “an unholy mess of platitudes and posturing.” He gave the film one out of five stars, saying “It’s not a good sign when you sit there thinking one thing – Make. It. Stop.”

“After Earth” scored just 32 out of 100 on Metacritic.com, which compiles ratings based on critics’ reviews. Only 13 percent of critics recommended the movie in reviews collected on the Rotten Tomatoes website.

This is despite the fact that the film was directed by M. Night Shayamalan, who scored a huge hit with the 1999 suspense drama “The Sixth Sense,” which grossed more than $672 million at the worldwide box office. Shayamalan was less successful though with 2006’s “Lady in the Water” and 2010’s “The Last Airbender.”

Box office forecasters predict “After Earth” will make $35- $40 million in U.S. and Canadian ticket sales from Friday through Sunday.

The film opened on Thursday and took in $1 million at U.S. and Canadian theaters, behind Lions Gate Entertainment’s comedy heist caper “Now You See Me,” which earned $1.5 million.

“It’s not an enviable task opening up this weekend,” said Phil Contrino, chief analyst with Boxoffice.com. International sales will be critical, he said, since Will Smith remains a big draw for overseas audiences.

Sony Pictures spokesman Steve Elzer said a weekend take of about $30 million in the United States and Canada would be a solid number for a movie that is not a branded sequel.