Not all pregnant women pose a risk to their future child from passive and active smoking. Many of them are trying to find confirmation that a sharp rejection of cigarettes is harmful to the child or there are safe doses of nicotine.

You can not be a scientist or a doctor to understand that smoking and pregnancy are incompatible and unacceptable concepts. This pernicious habit not only affects the development of the child, increases the risk of many diseases, but also threatens the life of the future baby. 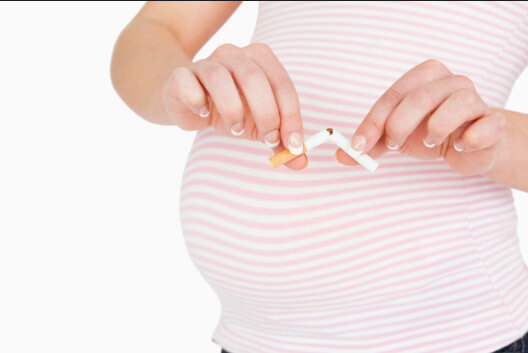 Nicotine addiction threatens the health of the mother. It can cause severe complications during pregnancy and childbirth. First of all, smoking causes a violation of blood circulation in the mother’s body – causes a sharp narrowing of the blood vessels. The same happens with the vessels of the embryo.

Therefore, smoking causes a lack of oxygen and other substances necessary for fetal development. Also, the toxic substances in the tobacco, constantly poison the body of a child.

Is it worth to quit smoking dramatically during pregnancy?

Some doctors believe that it is necessary to stop smoking gradually during pregnancy. They are motivated by the fact that nicotine starvation triggers a woman’s nervousness, stress, and irritability.

These disorders of the nervous system, of course, accompany the refusal to smoke, but they are unlikely to provoke a miscarriage. It is most likely that nicotine can cause an interruption of pregnancy.

Stress and irritability will have less impact on the fetus than 4,500 toxic substances in tobacco smoke. By giving up cigarettes, the expectant mother will never know how smoking affects pregnancy and the fetus. However, there is a much bigger possibility to give birth to a healthy and strong baby!

It’s no secret that quitting smoking is very unpleasant for most people. First of all, this is due to the fact that cigarettes cause physiological dependence on the smoker. Without the usual dose of nicotine and other non-substances contained in cigarettes, the smoker’s body cannot function normally. Therefore, many people use electronic cigarettes as a transition from the bad habit.

Judge for yourself – there is a big difference between the smell of nicotine and tasty vape flavors. As a rule, there are some adverse effects which last no more than a month, after which a person who uses e-products becomes evident the positive consequences of quitting smoking.

A lot has been said about the dangers of smoking. One of the most unpleasant consequences for expectant mother is the oxygen starvation of tissues and organs, including the brain. The child later begins to walk, and worse remembers new words.

Smoking during breastfeeding causes nervous stimulation in children, which can be manifested by anxiety, screaming, convulsions. These children have an unstable appetite, nervous sleep, they gain weight worse and are often capricious.

As you know, nicotine – a kind of drug that is addictive. The infant who received the first “puff” from the maternal breast, a predisposition to smoking in the future. Therefore it is much better to quit smoking as fast as possible. For sure, the process might be unpleasant and prolonged, but it worths the efforts.

Many future mothers choose e-cigarettes to make the process less harmful from the very beginning. But still, if they use nicotine vape juice flavors, the health of the child can be severely damaged.

Even using premium vape juice with nicotine is dangerous. However, everything is relative. If to compare the damage from conventional cigarettes and electronic – there is a big difference.

The dangers of smoking for pregnancy

Fetal weight decreases by about 200 g and there is a direct relationship between the importance of the fetus and the number of cigarettes smoked by the mother.

The children of smokers are facing 20-70% higher risk of developing congenital heart diseases.

In the future, these children often have behavioral problems, learning difficulties, they have low IQ, congenital brain defects can be observed. The negative effects of nicotine addiction continue to emerge with study after study.

Newly published research in the American Journal of Psychiatry found that women who smoke during pregnancy increased the risk of their offspring developing bipolar disorder (BD).

BD is a psychiatric disorder characterized by significant shifts in mood that alternate between periods of mania and depression. The onset typically occurs in the late teens or early adulthood.

A sharp decrease in immunity leads to a risk of greater susceptibility to infectious and allergic diseases and also a greater predisposition to oncological diseases.

Congenital anomalies and malformations are much more likely to develop in the fetus of a smoking mother.

Hyperkinesis manifests itself in the form of involuntary movements caused by contraction of the muscles of the face, trunk, and extremities. Medicine knows cases when patients also suffered from uncontrolled contraction of the larynx, soft palate, tongue and external eye muscles.

In addition, medical statistics indicate that the mother’s smoking raises the perinatal mortality rate by 27% and increases by 2.5 times the risk of SIDS (sudden infant death syndrome).

The harmfulness of smoking for pregnancy largely depends on the length of smoking, the number of cigarettes smoked and the duration of gestation. In early periods, smoked cigarettes can provoke miscarriage and pregnancy fading.

Poisonous substances adversely affect the immunity of the future mother. She becomes more susceptible to infections, some of which can provoke premature birth and fetal pathologies. In addition, nicotine helps increase blood pressure and significantly increases the burden on the heart of a pregnant woman.

How to overcome yourself?

The process of changing one’s own life and giving up the habit of regularly reaching for a cigarette begins with the realization that this is just a ritual, which in fact has no particular significance for the organism. The body does not benefit from this in anything. It does not receive any useful substances.

Psychologists advise switching all thoughts to pregnancy and future child. Any woman wants the appearance of a healthy and strong baby. In her very nature lies the desire to save the child’s life at any cost. And if this natural desire to use as a starting point a new and utterly healthy existence, everything will turn out.

1 thought on “Smoking Influence On A Pregnant Woman”