A bachelor party is held for a groom to celebrate the occasion of saying good bye to his single status and is given by his closes acquaintance and other friends. Apart from usual binging and drinking there are so many other things that are special in bachelor parties. 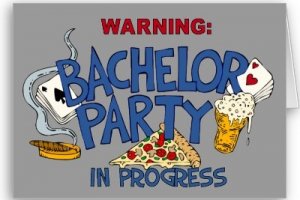 The best man would have sent the fiancée to the groom’s bachelor party with stern orders to avoid the usual strip club, his mates would have arranged for some erratic items of entertainment, which will not be made known to the Man of the party. Practically, the plans are kept clandestine and groom is unaware of the plan. It is his acquaintances, who might have planned for the strip show. Amidst all these tricks, the poor groom just wants to escape himself from the night without his reputation being damaged.

The party is not just about taunting the groom with flaunting of pleasure, which he sets to lose. They also make him look ludicrous and crack jokes between the guests and friends. Hence the bride and her maids are not welcomed to the party as the name says. The undesirable presence of the bride not only embarrasses him but also creates a negative impression that he is not capable of taking care of himself. Hence the bride should be ready to face the displeased groom at the bachelors’ party on her precious day of her life. [Also read; How To Make Perfect Proposal on Engagement Day]

Women will match their counterparts in having a swinging time at a wild party and will wake up only the next morning after being part of the party. They even do not feel uncomfortable when enquired about their behavior in the party in the presence of their boyfriends. They may be ready even to teach the bride about few tips to have such a wild time, if she too attends the party.

It is not necessary that all the bachelor parties will be just about strip clubs and nude women alone. If the groom is a lover of certain activities like poker or fishing, the party will be planned accordingly. All his friends will take him for a golfing or fishing and the whole night will be spent on a common excitement coupled with booze without any unpleasantness. [Also read; 10 first date ideas]

Pretending is not a big deal

In spite of knowing that his friends have planned some wild arrangements for the party, he will just pretend as though he is unaware of everything and it is somebody’s night out. Further he tries to prove to the bride that though he had many such associations in the past, once he met her, he just wanted to have her as her life companion.

Union among the guys

The real friendship among the host is the final thing that happens at the bachelor party. Majority of them apart from drinking alcohols or observing a stripper, they hang out together, talk and spend unmitigated time. The true friendship might not be as emotional as that of women but are more real than them. As there are very less opportunities for men to spend time with their friends in a relaxed manner, these happenings become more memorable in future.

Author Bio – Ajay Chauhan is a relationship expert and is on a regular advice panel with a leading lifestyle magazine. Currently he is writing for Lovewale.com.