This is a an personal account of a man I attended to a while ago which typifies the message of this article.

A month ago prior to presentation at the emergency department, Mr Peter Okon began feeling unwell after work one day. He took his temperature and it read 38.2degrees. He was really weak and had poor appetite. The fever kept increasing and was occasionally relieved by use of Paracetamol. The next day, on a friend’s advice, he started a course of antimalarial drugs and an antibiotic. He had temporal relief from the fever.

Suddenly, after about two days, he woke up feeling worse than ever. He managed to go to a nearby hospital where he was admitted for observation. After a series of tests, the doctor informed him that he had a viral hepatitis. His liver was infected and inflammed and that was responsible for his fever and other symptoms.

The antibiotic he took actually aggravated the already inflamed liver and worsened his condition. It would have been fatal if he had not come to the hospital when he did. He is on the path to recovery and going strictly by his doctor’s advice.

This account typifies the dangers inherent in indulging in self-medication practices.

Self-medication involves the use of drugs without the guidance of a qualified medical doctor. It has become a fairly common practice in our society. Several reasons people give for self medicating include lack of time to go see a doctor due to busy schedules, financial implications of booking hospital appointments, the long waiting time at the reception before seeing a specialist etc. However, is it worth the risk? What are the inherent dangers of practicing self medication?

The body sends out signals of ill-health with non-specific symptoms such as fever or malaise. Without the required medical training, you stand the risk of misdiagnosing yourself. This will lead to an incorrect choice of medication and may further complicate the illness. For example, headache maybe a symptom of tension or stress and could also be a symptom of a brain tumor.

Drugs are chemical substances which exert different effects in the human body. Taking medications without prescription could increase your chances of having a potentially fatal side effect. Being unaware of potential drug allergies could also result in unintended consequences. Some drugs are not meant to be taken together and not being aware of this could cause avoidable health problems. 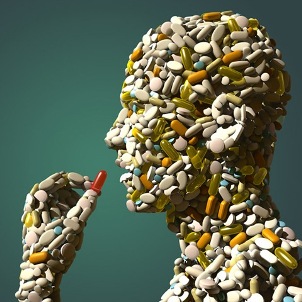 When you self-medicate, you could become psychologically addicted to using those drugs. This is highly associated with drugs that give a heightened sense of well-being when taken. eg codeine containing cough syrups, opiod pain relievers.etc. Drug dependence has both physical and psychological consequences. It could impair your sense of judgment and cognition and could have effect on work and family.

When you take over the counter medications regularly, you stand the risk of suppressing the manifestation of a more fatal disease. The use of an analgesic may give temporal relief to a symptom like headache. Headache or fever is common to many medical diseases. By masking these symptoms temporarily, you make it more difficult for a doctor to arrive at a correct diagnosis. This could prolong your recovery and put you at risk of complications.

In conclusion, though it is not out of place to take some relative safe medications like minor pain relievers occasionally. However, you need the right information to ensure the safe, effective and rational use of some of these drugs. Furthermore, it is advisable to avoid taking specialized medications like antibiotics without it being prescribed by a health professional.

The body is an amazing piece of machinery that is highly specialized. Even if you read fully around a medication, you will not really be knowledgeable of how it’s going to affect your body and you don’t know how it might interact with other medications and things around the body.

Your health and life are very important so when next you are tempted to swallow a tablet without prescription. Wait and think!

If you’ve got questions or contributions about this topic, feel free to ask by using the comment box below and don’t forget to share this article using any of the social networking icons below