Ever wonder what men want in a woman? What are men looking for… and what makes them see a woman as more than just a friend?

Well, this will finally tell you what men want in a woman. I will also reveal the one thing men definitely don’t want. 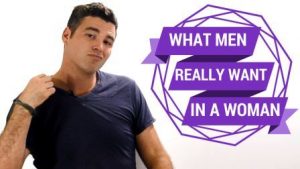 A Woman Who Can Laugh

Men (most) like a woman who is able to let go of the social constraints most of us try to live according to. What I mean is… a woman is not supposed to laugh at bathroom humor, strip club jokes and anything “too dirty.” This gets branded as “trashy” behavior. Women tend to be afraid of being perceived as trashy.

What ends up happening? Instead of really understanding what they genuinely like, find funny and want to participate in, women base their decisions and actions on what they think a man wants.

A Man Wants A Woman Confident Enough to Be Herself

The phrase “be yourself” makes my brain hurt for a variety of reasons I don’t need to get into right now; however, just know this: if you build a relationship on a rocky foundation, you essentially build a “castle in the air.” But the foundation has to be solid or the entire castle crumbles. And when it crumbles, you fall… hard. You’re blindsighted. Broken. Afraid. Hurt. Angry.

You can avoid this by never betraying who you are in an effort to please him. Don’t change yourself for him; if you want to change and for the better, then you should… but losing your identity in a relationship and defining yourself through him is definitely not what a man wants in a woman.

A Man Wants a Woman Who Turns Him On

I mean, of course this had to appear somewhere in the article. What turns a man on most? When you are true to your desires, personality and nature. If you go around trying to be sexy you will end up feeling awkward, uncomfortable and unable to enjoy the present moment.

No man wants a woman who pities him or feels sorry for him. Why? Men want to feel like winners in the world. Being pitied makes a man feel unworthy and incompetent. Men like to deal with problems on their own and love when a woman is in their corner, their cheerleader… and believes in them.

What do you think about this? What do men want?