Is Positive Parenting Sparing The Rod?

There is this popular adage that says “spare the rod and spoil the child” which mean, if you don’t make use of  rod as part of or mean of discipline your child, you’re actually spoiling the child. When he is supposed spank with cane in his bombom or possibly on his hand, you decided to leave him and spare the rod. 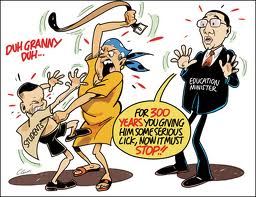 In developed countries, the use of rod on your child may be regarded as child abuse, and you’re likely to be sued for such act. There are different ways parent punishes their wards, that is why what is applicable in one part of the world is a no-no in another part of the world. We are all practicing positive parenting which has lots of benefit for the parent as well as the children.

So, is positive parenting sparing the rod?

The response to this question will be determined from what part of the continent one is coming from. There are some children that don’t respect anyone, even their parent find it difficult to talk to them. But immediately they sight their parent with cane, they behave themselves, because they are frighten of the presence of the cane in their parent’s hand. Some even regarded cane as children’s god, because they always respect and obey it else, it will come down on them either sparingly or heavily. Children don’t like to be beaten especially with rod.

As far as the parents are getting result from not sparing the rod, this does not mean that is the only right way to treat a child. There are other ways in which children can be made respectful and responsible.

In positive parenting, children are not supposed to be abuse under any kind of disguise in the name of instilling discipline on the child. Several studies have shown that if we were brought up with corporal punishment we will most likely bring up our children the same way. What we know about being parents generally comes from the parents that bring us up.

Let look at other ways by which children can be discipline apart from corporal punishment.

It is a known fact that children learn quickly from what their parent are doing. Parents is their first role model, thus, they look up to you. When your child does something that is wrong, let say for instance, you got home and discovered that the whole house has been turn upside down by your children. You will surely get annoyed and your adrenalin rush will be greater, pushing you to reach out to cane and deal with them immediately. You will want to pour your anger on them instantly. This is not the best time to discipline your children, give yourself some time to deal with the anger first and then calm down your nerve by taking a deep breaths, or a hot bath. The point here is to deal with your annoyance first, so that you will not risk taking it out on your children.

Then you can begin to think about how it happened. Was it an accident, a deliberate cry for attention or are your children mad at you? Having been able to deal with your emotion this way, you can now call on their attention. At this time, you will be able to deal with the issue with an open mind.

The children will not be exposed to an irrational role model; you will at this time be able to choose the appropriate discipline for the children responsible for turning the whole house upside down. Or if there is something bordering them, you will be able to know how to deal with their problem rather than spanking their bottom.

There are other forms of discipline (other ways of discipline your children is schedule for the next post) which you can use to put your children in order, rather than bottom spanking, slap on the wrist, the smack on the face and any other body parts that may be struck. [Read; Parenting Guide For Disrespectful Behaviour; Hold Sign for 90 Mins in Public place, is it wrong or right?]

Feel free to share your parenting experience with us, we will be glad to hear from you and don’t forget to also give our Facebook Fan Page a good like.

2 thoughts on “Is Positive Parenting Sparing The Rod?”