Kratom (Mitragyna Speciosa) is a medicinal plant found in South East Asia. Hailed for its medicinal properties, cultures in those parts have used kratom for years as an energy booster, pain reliever, immune system stimulator, mood enhancer and as a general analgesic.

The medicinal benefits of kratom each differ slightly by strain, but for the most part each share the same effects, varying in the intensity, strength and length. 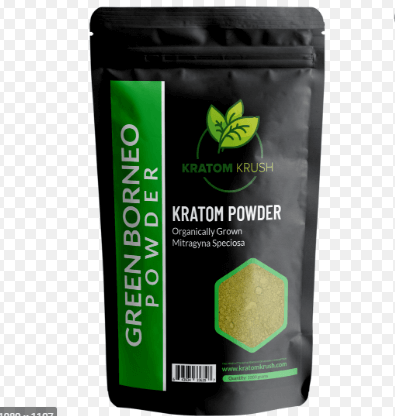 Green Borneo Kratom is often referred to as Green Vein Borneo Kratom. The name not only refers to where the plant comes from, the Southeastern island of Borneo, but what type of kratom leaves are used. This particular strain is created from kratom leaves with green veins running down the center, hence the name.

As a kratom plant matures, different levels of alkaloids build within the leaves. The amount of alkaloids will influence the effect the kratom will have, giving the veins their medicinal properties. Green Vein Kratoms are known to contain a rare alkaloid structure that allows it to have a wide range of medicinal uses from muscle relaxation to antidepressant.

According to the US DEA, kratom is used in the public to alleviate pain, anxiety, depression, or opioid withdrawal. Specifically, the Green Borneo has a high alkaloid content that makes it a natural painkiller, and like its relative plant, the coffee, it has similar energy boosting abilities. It is considered to be the balanced strain between its Red and White counterparts as it does not cause sleepiness or restlessness when taken in the correct dosage.

Pain Relief is a major medicinal benefit to all of the kratoms. Green Borneo is specifically great for mild to moderate chronic pain, without the sedative impact of its Red counterpart. This makes it possible to use Green Borneo during the day for a high level of relief for pain in joints, muscles, bones and migraines.

Green Borneo is extremely effective as an energy booster. In most cases, it can be used to replace coffee as it has the same energizing effects without the jitters, high blood pressure and increased anxiety and agitation. On the contrary, it can help with alertness and enhance mood.

Since Green Borneo is a stimulant, it can help people be more alert and focused. This is particularly beneficial to people who struggle to maintain concentration needed for completing a high-focus task such as a work project or homework assignment. It has been reported that Green Borneo helps people pay attention better for an extended period of time.

Green Borneo is also helpful in relieving constipation. It helps users maintain a stable metabolic rate that allows for steady and rapid digestion as well as absorbing nutrients from food and flushing toxins out of the body for a healthier digestive system.

It is important to remember that not all drugs affect every person the same. Many factors determine how a drug can affect you; the most important factor is dosage.

Borneo strains, regardless of color, have more potent and longer-lasting effects than other kratom strains. For this reason, it is recommended to find the perfect dose for your body by starting low. It is important to mention that in higher quantities, Green Borneo can have an unwanted, sedative effect and therefore, must be taken cautiously.

First time users of Green Borneo are advised to take no more than 1-1.5 grams per dose. Once you become more accustomed to the effects of the strain, increase the dosage in increments of 0.5 grams. The total dosage should be kept relatively low, between 2 to 3 grams, in order to experience most of the benefits without any side effects.

Those who have developed more tolerance for Green Borneo should still keep the dosage relatively low, without exceeding the dosage amount of 4-5 grams. Although Borneo strains are known for having fewer side effects than other kratoms, taking more than 5 grams per dose can result in stomach aches, drowsiness, nausea, and irritability.

It is important to monitor the effects of each dose in order to avoid unwanted side effects. Your body’s unique and the Borneo kratom effects may not work as expected. When trying new medicines and finding your correct dosage it is always best to stay on the safe side.