Fergie Time Exist But Not Only For Manchester United

This is a little bit diversion from what we use to post on this blog, but just because our darling team Manchester United   and the love we have for football game, we often time publish some heartfelt issues here, so just enjoy it if you’re a football lover and if you’re not is good for a start anyway. This publication is actually gotten from BBC Sport and we feel it good enough to have it published as well for your reading, so need to going over there so search the post. 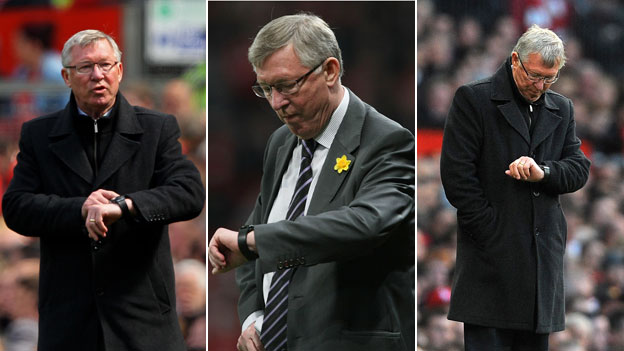 It’s a well-established idea among football fans that there’s something called “Fergie time” – an extra helping of added time when Sir Alex Ferguson’s team, Manchester United, are losing. But does it really exist?

The final minutes of a football game can be the tensest. If the match is tied, and both teams are desperate for victory, or one side is a goal down with the chance of pulling off a draw, these are desperate times. Some (mostly non-Man Utd fans, it is fair to assume) accuse Sir Alex Ferguson’s team of getting more added time to score that crucial final goal than any other team – and have dubbed this Fergie time.

If it does exist, it follows that referees aren’t doing their job properly, as it’s their responsibility to calculate how much time to add on at the end of the standard 90 minutes.

“You dispel it as popular myth of teams that are jealous of Manchester United’s success.”

But when you take a step back, he says, you realise there could be something in it.

“I think it would be too easy to just say it’s rubbish. When you analyse and think psychologically what happens, the pressure that’s on you at Old Trafford or the Emirates or Stamford Bridge, the pressure that is implied upon you must have an effect, even if subconsciously.”

The phenomenon of Fergie time goes back to a game in the very first Premier League season, 1992/3, says Duncan Alexander of Opta Sports, which collates data from the football leagues.

It was Man Utd v Sheffield Wednesday and the score was 1-1 after 90 minutes. Seven minutes of added time were given, during which Steve Bruce scored for Man Utd, clearing the way for their first top-flight title in 26 years.

“Ever since then, every time United have been given quite a bit of injury time, it’s been flagged up in people’s heads and they’ve said, ‘Oh United have got more Fergie time again’,” says Alexander.

To work out whether there could be anything in it, he looked at the average amount of added time for the second half of every match. After all, the second half is where added time is going to matter most. “This season United have had the most,” he says. So the suspicions about Fergie time are true – but only for this season. Last season Man Utd had the lowest second-half average added time.

But the crucial figure is how much added time Man Utd get when they have been drawing or losing after 90 minutes. Opta looked at the relevant data over the past three seasons – 2010-11, 2011-12, and the current season to date. They compared Man Utd with five other top teams:

Manchester City, Chelsea, Arsenal, Tottenham Hotspur, and LiverpoolWhen Man Utd were losing, they had an average of four minutes and 37 seconds added time, Alexander says, compared with three minutes and 18 seconds when they were winning.

“So you can see there that in games they lost, they got more time,” he says.

“For the other, so-called top teams, other than Chelsea, all of them had longer games on average when they were losing. Whether that’s a case of the defending team wasting time to try and hang on to what would be a fairly notable victory, or whether it’s because referees are influenced by the fact Man Utd are losing, this data doesn’t show.”

Her calculations show that if the home team is winning, then the added time is cut by 46 seconds.

There is no statistical proof that Fergie time applies specifically to Man Utd. But the statistics do show a bias towards big teams. Perhaps we should call it “Mancini time” or “Wenger time“? Or even “Benitez time” (or insert name of whoever is managing Chelsea at time of reading)?. I hope you enjoy it just as I did.