What way can you tell your teen child to stop using facebook for at least 5 months? Surely you wouldn’t think to offer her as much as $200. This is exactly what happens to a Boston father named Paul Baier, he paid his daughter $200 to quite social networking site called facebook. Paul Baier a research consultant from Boston updated the agreement signed letter image he has with his daughter who is just 14 year old on his facebook profile on Tuesday. 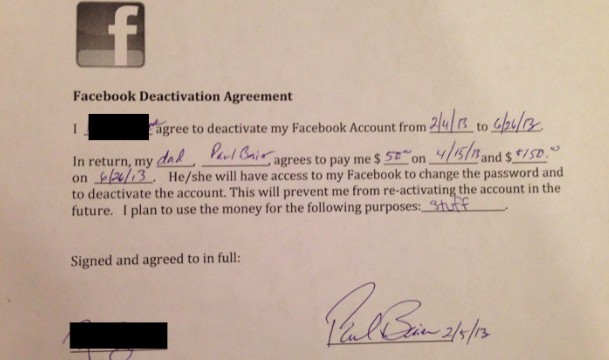 From the agreement signed letter image, the daughter agrees to deactivate her facebook account from the previous day (Monday) till 26th June, 2013. At that time of the year, schools would have been in the summer break. The father agrees to pay her $50 in April and then complete the remaining part $150 by June, 2013.

The daughter was asked, what will she use the money for? She responded with a single word and said “Stuff”

Lots of folks condemn what the father has just done, claiming that, it is bribery, and that he fails in the part of parenting. One person even said Paul Baier is an idiot. But at the same time many people too reasoned with the father, if that is the right step to take, there is nothing absolutely wrong with the idea, although the money may be much but in the family it doesn’t count much to them. He want her daughter to concentrate with her studies because he might have found out that the social networking site is having a negative effect on the academic performance of his daughter and he need to step in, to at least offers something to help his daughter out of the situation.

Another person even wrote “Why not try something called ‘parenting‘. It’s more difficult than bribery but will more beneficial to your daughter in the long run,”

A friend of Paul Baier called Kent Wellington comes to the rescue of Baier and said “He’s a good guy and good parent. Regardless, there’s nothing wrong with a parent being proactive with their kids in the area of social media,” Wellington wrote. “I’m sure the dialog that lead up to the agreement was as valuable as the contract.”

What about if you’re in this kind of situation like Paul Baier, what will you do? Will you offer money, gift or what action will you take if you don’t like monetary reward just like in the case of Paul Baier. Love to hear your response