We have a long-standing custom of giving engagement rings in our society, and it is an exciting one at that! All girls dream of the day when their ideal guy would slip a dazzling rock on their finger and they will know they have found their prince charming. However, how often do we take the time to consider where this tradition originated and how it evolved into the star-studded event that it has become? 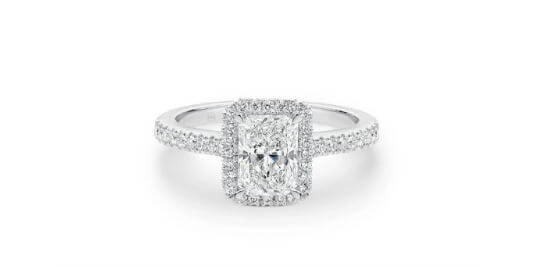 This is an intriguing subject to investigate, and in the following section, we will go through the history of diamond engagement rings. How did phrases such as “a diamond is eternal” come to be, and how did these gleaming stones come to be accorded the kind of esteem they now enjoy in the wedding industry?

This practice, according to anthropologists, started as a Roman custom in which spouses wore rings that were tied to little keys. Their husbands’ “ownership” of them was intended to be shown by these symbols.

As far as records can tell, Archduke Maximillian of Austria is credited for commissioning the world’s first diamond engagement ring, which dates back to 1477. This was intended for Mary of Burgundy, his fiancée.

The Victorian era is credited with popularising extravagant engagement ring styles, which may be traced back to this period. This kind of jewelry often included diamonds combined with other jewels, a variety of precious metals, and a variety of enamels.

When these rings were first introduced, they were typically fashioned into the forms of flowers and referred to as “posey rings.” From then on, the habit of matching diamonds with other stones and often mounting them in filigree settings persisted through the Edwardian period and into the twentieth century. Continue reading to find out more, or have a look at a stunning collection of 2.5-carat lab-grown diamond engagement rings.

The Origins of a Well-Known Slogan

Let’s fast forward to 1948 when the first appearance of a timeless phrase happened. The corporation De Beers is credited with coining the phrase “A Diamond is Forever,” which has become a household phrase.

This campaign was quite successful, resulting in a significant increase in sales. Although this tagline proved to be memorable and enticing, it also had different interpretations that contributed to the increasing popularity of diamonds.

The concept of a diamond being “forever” communicated the reality that the stones are very long-lasting, while also imprinting in the minds of Americans the notion that marriage is an eternal commitment. Advertisers’ magazine, Advertising Age, dubbed this phrase “the slogan of the century” in 1999.

These words were written by a corporation that sought to make diamonds more widely available, capitalizing on the decline in demand for diamonds in the United States that occurred during the Great Depression of the 1930s.

Several years prior to the Great Depression, diamond sales had already been on the wane due to the widespread belief that these stones were a luxury saved solely for the rich. As part of their advertising campaign, De Beers presented attractive movie actors who were richly decorated with dazzling diamonds, in addition to coining the now-famous phrase. Sales of diamonds had climbed by an astonishing 50% in the three years after the launch of the campaign.

Possibly one of the most important factors in the campaign’s success was its emphasis on matching the eternal beauty of a diamond with the same long-lasting pleasure and love that marriage is intended to embody.

Images of honeymooning couples or even advertisements that compared the acquisition of a diamond to the creation of a city were frequently distributed during this period, which was characterized by a stress on permanence and timelessness.

It was via De Beers’ advertising push that the custom of diamond engagement rings was actually established and spread across society. Even as early as the 1940s, De Beers’ annual reports often made mention of the “engagement diamond tradition,” despite the fact that this was not yet something that had caught on fire.

However, the more advertisements that centered on that theme were launched, the more the general public became interested in continuing the practice. In 1951, eight out of every ten American ladies received a diamond engagement ring as a wedding present from their groom. In the intervening years, that figure has stayed mostly constant.

The history of engagement rings is not precisely written in stone, but it can be traced back to the events described above as well as the emergence of a motto that is still held in high regard today, decades after it was first introduced.

Regardless of where this tradition originated, it appears to be one that will endure, which is why we enjoy providing couples with affordable, customizable diamond ring options that brides will fall in love with from the moment he gets down on one knee, symbolizing his everlasting love and affection.