In this increasingly divided world of ours one thing unites us all – we all need to sleep.

That’s where the similarities end however. We all need sleep but we all do so in a myriad of different ways.

Some of us starfish on our back, others lie face down like we’ve fallen from a great height, some of us balance daintily on our sides, while the rest of us curl up in little balls like baby hedgehogs.

Being in a relationship generally means sharing a bed. What type of bed can certainly make a big difference. But what happens when different sleeping styles collide?

Well according to body language experts the way we bed down with our partners at night reveals quite a lot about our the health of our relationships. 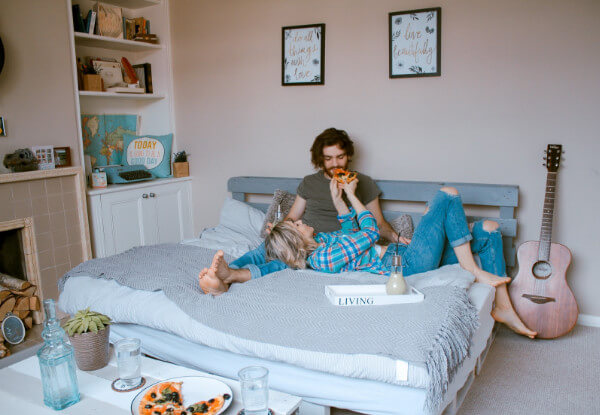 Adopted by around a fifth of couples, the spoon is both a protective and sexually-charged position. Both bodies are intimately pressed against each other and according to body language experts this suggests a high level of trust is present in a relationship.

The spoon tends to be a short-lived position and often doesn’t even make it all the way until morning time, couples tend to migrate away from each other naturally as they snooze.

Next up is the loose spoon. Which is exactly as the name suggests, the spoon but a little looser. One partner still cradles the other but there is much more space between their bodies.

The loose spoon tends to be the natural evolution for many couples as the burning sexual desire of the early months or years of a relationship transition to something more mature.

It is still a very loving position and maintains a high level of intimacy but it is not quite as sexually charged as the classic spoon. It gives each partner a little bit more room to breath while still maintaining a close connection.

Also sometimes referring to as ‘the pit’, ‘the cradle’ and ‘the nuzzle’, the nook is where one partner sleeps on their back and the other snuggles into their chest. Legs may or may not be intertwined depending on preference.

Like the spoon, the nook is a very intimate and protective sleeping position and one that signifies a high level of affection and trust between the couple.

And again like the spoon it is a position often adopted early on in a relationship but one that fades with time.

As the name suggests this is where partners sleep facing opposite directions. While turning your back on someone during the waking hours of the day could be construed as rude and lacking affection. The same isn’t true at night.

Couples who sleep back to back tend to be in very firmly established relationships. Both parties are confident of their partner’s love and affection for them and don’t need to be reminded of it while they get on with the important business of sleeping.

Back to back is one of the most popular sleeping positions for couples with over a quarter reporting it as their go to move.

A very sweet position indeed, where a couple may sleep at opposite sides of the bed but one or both partners will extend either a foot or hand to touch somewhere on their partner’s body.

The connection might only be minimal but it is very much present.

Sleeping apart shows the couple are both independently minded but by maintaining a small amount of contact throughout the night it shows that they are caring enough to let their loved one know that they are there for them.

Separate beds can mean a lot of things for a relationship. It can definitely mean things aren’t looking too rosy. But it doesn’t have to. Couples sleep in separate beds for a host of different reasons.

In fact, a growing body of evidence suggests that getting a good night’s sleep is just as important for a relationship as sleeping together in the same bed.

If one or both partners in a relationship suffers from a sleep disorder then the chances of getting a good night’s rest could be greatly increased if they sleep in separate beds.

So there you have – a quick run down of the most popular sleeping positions for couples and what they say about your relationship. Did you spot your position?