How To Remain Faithful When Tempted To Cheat

At some times in every relationship, there’s temptation to cheat whether you like or not, though not your fault really but human instincts can sometimes be funny. You are  an attractive kind of person and in a loving, happy, committed relationship, but in everywhere you go, because of your attractiveness, there is every tendencies to cheat, when you turn around people give you seducing smiles, at the bank, checking points, grocery stores, and even in the public offices and when you’re walking on the street, people look at you  with a raised eyebrow. 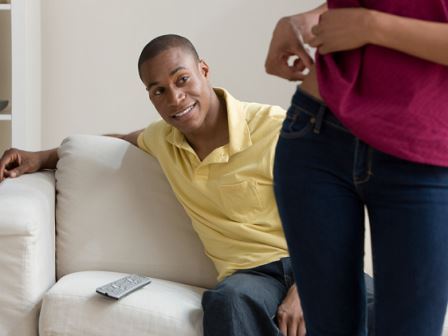 Sometimes in your way to assist someone to pick up what dropped from their hand, they see you and get attracted and then spark up beautiful conversation with you. From there they begin to ask for your numbers, you refuse and they insist on getting around finding their way of contacting you.

You know people can be funny, even if you have your wedding ring right there in your hand, it does not deter some people from launching that animalistic desire.

What do you do? How do you resist the temptation to cheat in all of these happening to you in your relationship and or marriage?

When things like this happen, you find yourself in a moment of conflict between the tempting thought to cheat and your longer terms goal of committing to your partner. You see, having the thought is just natural anyway, it shows you’re human but giving in to that devilish though that’ll ruin your relationship, marriage and even your life is what you have control over. You can’t be forced to give in to that temptation and cheat on your partner.

The fact still remain that, everyone irrespective of your relationship, is automatically pulled toward an attractive person. People will want to have a conversation with you naturally and they tend to look into your eyes for longer time.

All these happen to people without much effort from them, you’re attractive and they can’t seem to let good thing go pass them without having a look.

Did you even know that, making eye contact with attracting person is rewarding to the brain?

How then do people are able to resist the temptation to cheat even with the immediate tendencies to cheat at every opportunity surrounding them?

This approach sometimes its importance are neglected. When a person want to avoid drinking alcoholic drink, he or she must avoid going to the bar, if you want to avoid getting diabetics, you’ll try as much as possible to avoid eating foods that will increase your blood sugar level, this same thing applies when tempted to cheat, you’ll need to avoid the source of that temptation.

When you’re confronted with the source of the temptation every time, the pressure will be much on you and at certain stage, you’re going to bow to that intense pressure.

Every one may be attracted to you, but not everyone have the intention to initiate or trying to tempt you so that you can have sex with them. Most times, it is one particular person at every different place you may go.

This one person can sometimes be difficult to avoid, let say someone in the same office with you in your working place, a co-worker, your neighbour, customer, friend or client.

Nonetheless, irrespective of how close the person is to you, do the best you can to avoid them, especially in private, and don’t fool yourself into thinking that you can be alone with this person if you know in your heart that you can’t. Avoidance can work if you’re honest with yourself.

Sometimes, human being can deceive themselves thinking that some certain thing can be control at any time even if they’ve felt many times into the same situation they intended to avoid.

This is exactly what’s happening to adulterer (when you cheat on your partner, you’re an adulterer), they often times deceive themselves thinking that, this is the only one time they are going to cheat on their partner. This is in other to justify their thinking and denied the truth that stare them in the face. [Read; Natural cause why men and women cheat in relationship]

The one time, will lead to two times, three, four and the circle goes on until when caught, that is the end of your relationship or marriage, and it can ruin your life. You can’t even stand in the community of people especially around the area where you’re being known.

If you feel tempted to cheat and you really want to avoid the regression that comes after, you’ll have to remember the long-term consequence of cheating.

Open up with your partner

This maybe the most difficult task to do, but if you’re close to your partner and you do communicate really well about nearly everything that happens to you, it won’t be a difficult thing to address.

The truth is that, your partner may feel disgusting about it in the first place, but he/she must appreciate the effort you’re trying to make to avoid the temptation to cheat.

I know that it is not easy to admit to your partner, you will not want to see him/her hurt as a result of what is happening to you. But if the temptation is so great that you’re almost giving in, it is better to let your partner aware of it now than later when you’ve cheated on him or her.

The level of hurting will be too much for any partner to bear even if both of you ended going separate ways.

So let him/her get hurt now and hopefully, you’ll be appreciated for having the strong courage to open up in other to avoid the impending disaster in your relationship and marriage.

I believe with these few pointers above, it can go a long way to help you to remain faithful when tempted to cheat.

Got any questions, contributions or comments?

Please feel free to let me hear from you, make use of the comment box below and don’t forget to help share this article using any of the social network icons below.