Skip to content
All eyes on the ultimate prize as Season 9 of Gulder Ultimate Search (GUS), Nigeria’s first 100 % locally produced reality TV show, gets set to commence.
N9 million, a brand new SUV and N500,000 swaggar allowance awaits the winner. There is also the bragging right of being referred to as an “Ultimate Champion” and subsequent induction into the Gulder Ultimate Search “Hall of Fame”.
Ever since the very first edition was held on the Snake Islands, off the Atlantic Ocean coast of Lagos State in 2004, subsequent editions have been staged in different forests across Nigeria. In 2005, the show was held at Obudu Hills, Calabar, Cross River State while the 2006 edition was held at the Nigerian Institute for Oil Palm Research, NIFOR, Edo State. 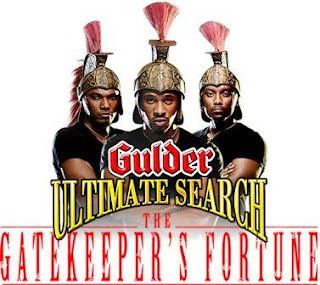 In 2007, the show moved to Shere hills, Jos, Plateau State. The popular Agwu Hills in Enugu State hosted the 2008 edition. In 2009 and 2010, GUS was held in Omodo forest, in Osun State and J4, Omo Forest, Ogun State, respectively. By 2011, Edo State became the first state to host the show twice. Gulder Ultimate Search 8 was held at the Egbetua forest Quarters, Ososo Hill, Akoko Edo.“So where will Season 9 hold this year? The answer remains shrouded in secrecy; but will soon be revealed”

This year, the hallowed jungle awaits brave and daring young men and women, courageous enough to attempt to unearth the long lost fortune, hidden centuries ago by a wise Gatekeeper- a true hero of old.

The jungle is not kind to the contestants. This is not an adventure for the faint-hearted or lily-livered. It is a contest that will test contestants’ endurance, strength, courage and mental alertness. Past contestants have attested to the fact that Gulder Ultimate Search is no make-belief. What is beamed on TV is as real as it gets!
Contestants are cut off from the luxury of the outside world. Reality sets in as they have to make do with the bare essentials they can lay their hands on in the thick forests. With the bare ground for beds, sticks for walls and palm fronds for shelter, they are at the mercy of severe rains and the scorching sun. Nature sometimes is not kind.
Creeping creatures of the jungle also lurk around. Even food becomes a luxury and sometimes is not guaranteed. In the jungle, friends become foes and every contestant a threat, as they battle for the ultimate prize.
See The Guideline For This Year’s Participation Below
In order to participate, the applicant must meet the following requirements:
Important Information on the Registration Form
Application Closing Date