Finally Margaret Thatcher goes home, the former Prime Minister of Great Britain popularly known as “The Iron Lady” on her way to eternal rest where she would be remember in the life of British citizenry for long time to come now.

Borne aloft on the shoulders of eight military servicemen, the coffin of Margaret Thatcher was carried up the steps of London’s main cathedral on Wednesday for a funeral service attended by the Queen, Britain’s political elite, and global dignitaries. 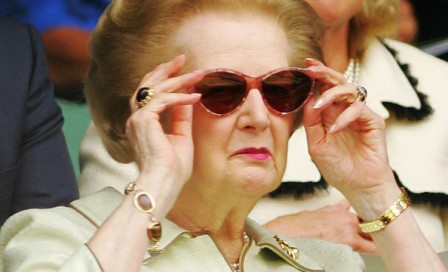 In life, the woman the Soviet Union christened the “Iron Lady” divided the British public with her free-market policies which sometimes wrought wrenching change on communities. In death it is no different.

Thousands of supporters lined the streets of London as her casket made its final journey from the centre of British political power in Westminster to the service on top of a gun carriage draped in the red, white and blue British flag. Most people clapped in respect but about two dozen opponents turned their backs on the procession.

Margaret Thatcher, who governed Britain from 1979 to 1990, died on April 8 after suffering a stroke.

Honoured with a gun salute from the Tower of London every minute and the silencing of the Big Ben bell, British soldiers played Beethoven, Mendelssohn and Chopin to accompany the grandest funeral for a British politician since that of Thatcher’s hero, Winston Churchill, in 1965.

“She was the first woman prime minister, she served for longer in the job than anyone for 150 years, she achieved some extraordinary things in her life,” said Prime Minister David Cameron, leader of Thatcher’s Conservative Party.

“What is happening today is absolutely fitting and right,” he said, dismissing concerns by some Margret Thatcher critics about the cost and pomp of the event.

A handwritten note placed on a wreath of white flowers on her coffin read: “Beloved mother – always in our hearts”.

More than 700 armed forces personnel from units Thatcher led to victory in the 1982 Falklands War lined the streets. Police stood every 5-10 metres along the route. 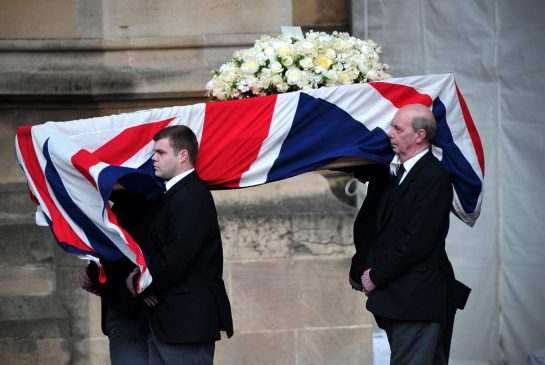 People gathered along the funeral procession route early in the morning with placards that reflected a range of views.

“You gave millions of us hope, freedom, ambition,” read a placard held up by one man, while a short distance away another man held one that read: “Over 10 million pounds of our money for a Tory funeral”. Tory is another word for Conservative.

“This country was pretty well down on its knees in the seventies,” said Roger Johnson, who stood in central London.

“Margaret Thatcher came along and sorted everything out. Her legacy is that she put the word “great” back into Great Britain,” he said.

Her admirers, of which there are many in her party and in southern England, argue that she merits a funeral on a par with Churchill.

“Some people say she divided the country: but if she was so divisive, how did she win three elections?” said Joseph Afrane, 49, a security officer from south London, who wore a cowboy hat, jacket, shoes and even watch emblazoned with the British flag.

“I VOW TO THEE MY COUNTRY”

More than 2,300 mourners are attending including 11 serving prime ministers from around the world, the British government’s entire cabinet, two heads of state and 17 foreign ministers.

But there were notable absences. Former Soviet leader Mikhail Gorbachev and Nancy Reagan, the widow of Thatcher’s great U.S. ally Ronald Reagan, are too frail to attend.

Margaret Thatcher struck up a close relationship with Reagan during the Cold War and was among the first to decide that Gorbachev was a man she could “do business with”.

The guest list for her funeral has prompted talk of diplomatic snubs. A spokesman for Cameron denied the United States had snubbed Britain by not sending anyone senior from the administration of President Barack Obama.

Mourners at the funeral heard her favourite hymns, including “To Be a Pilgrim”.

St Paul’s, the 300-year-old cathedral where her funeral will take place, played host to the funerals of Nelson, the Duke of Wellington and Churchill as well as to the wedding of Prince Charles and Lady Diana Spencer.

The abiding domestic images of her premiership will remain those of conflict – huge police confrontations with mass ranks of coalminers whose year-long strike failed to save their pits and communities, Margaret Thatcher riding a tank in a white headscarf, and flames rising above Trafalgar Square in the riots over the deeply unpopular “poll tax” which contributed to her downfall.

But Cameron said that Margaret Thatcher’s battles, particularly her crushing of trade unions that dramatically cut the number of days lost to strikes, had in fact reduced divisions.

“She was a bold politician who recognised the consensus was failing…She took tough and necessary decisions and in many ways created a new consensus…So in the end the breaking of the mould … led to less division, less strife,” he said.

Even Margaret Thatcher’s critics concede that – for better or for ill – she transformed the face of Britain.

In 1979, when she came to power, Britain was in the grip of a long post-war decline with notoriously troubled labour relations, low productivity and was being outperformed by continental rivals France and Germany.

Data show she turned that around by boosting home ownership and the service industry, breaking the power of the unions, and deregulating financial services.

But the price – growing inequality and the closure of large swathes of the country’s industrial base – left parts of the country struggling to create new jobs and rebuild decimated communities, leaving a bitter taste which endures. Culled From Yahoo News