Juan Manuel Marquez finally knocks out Manny Pacquiao in a keenly contested fight last night. It was Marquez best performance in his career.  Pacquiao which is a Filipino while his counterpart Marquez is from Mexio. This stage fight is the fourth attempt in which Paquiao has won the previous three encounters, although Marquez never agree with the judge’s decision on those encounter but today Juan Marquez is the winner. 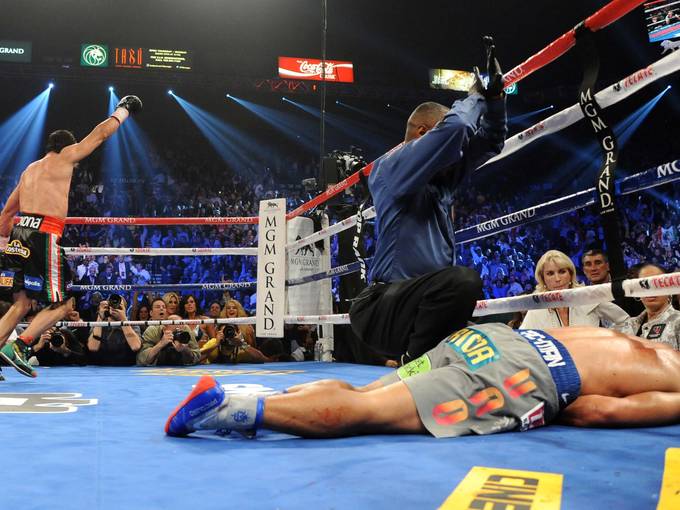 How it all happens

Juan Marques knocked Manny Pacquiao out as the sixth round ended, putting the Filipino superstar out face first on the canvas. Pacquiao had missed a right and Marquez used his specialty, the counter right hand, to close the show. He landed the right directly on the chin, putting Pacquiao out cold.
Pacquiao lay motionless for several seconds as the sellout crowd at the MGM Grand Arena erupted. About six minutes after the fight, Pacquiao walked toward Marquez in the center of the ring, smiled and touched gloves with him.
Could this be the end of Pacquiao? Only time will tell, this is the first time in history in which Pacquiao will lost two fight in a row. According to Pacquiao, he said “That’s boxing,” said Pacquiao, who added he has no plans to retire. “I started to get confident, but I never expected that punch.”
Marquez never suffered from broken nose as earlier believed, it is just a bruised. When Pacquiao went down lying face down in the pool of his blood, Pacquiao’s wife, Jinkee, shrieked out and attempted to get to the ring. Promoter Bob Arum put his arm around her shoulder to comfort her.
Asked about a fifth fight between the two, Top Rank promoter Bob Arum, who handles Pacquiao, said, “Why not? We haven’t seen such an exciting fight in years.”
Weekend like this, our love and relationship with sport cannot be put aside, we just have to write about interesting happening around sports
0
0
0
0
0