How You Should Handle Competition From Other Men

If you’re dating beautiful woman, I mean hot babe that when she passes any place where guys are present, she will surely command attention from them, then chances are you’re going to be competing with other men as you continue to date the hot woman. 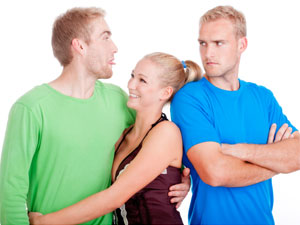 You can’t even avoid it, it is natural part of the dating game, no man will see any beautiful damsel that pass him without turning over to just take a look, especially when the man in question does not have any woman in his life.

But before I let you know how you should handle competition from other men, I will like to discuss two critical issues that will sabotage your effort in gaining control over your woman and put other guys at bay.

The two of them are; Insecurity and Jealousy.

How is insecurity affect you and give other guys more power to hit on your girl? It is simple, when you allow yourself to be feeling insecure about your woman, you begin to think that other guys might be eyeing your girl in such a way that you don’t like.

You begin to feel uncomfortable with yourself because the combination of this kind of feelings will make you to get worried every time and you’ll allow it to cloud your thinking with false feeling that you can’t get another beautiful women and that you’re not good enough for her if she can dare give attention to other guys.

Just as you’re thinking about it, when you start going out with your hot woman and guys started hitting on her right there before your eyes. The feeling of insecurity will be triggered and if you don’t take control of it, you might end up putting up dump ass and wuss behaviour that will show you’re insecure in the full glare to the whole world. This insecure behaviour will lead you to even more dangerous one, which is jealousy.

This is even more powerful than insecurity, it is a powerful emotion that if not control or put under check, it lead guys to kill people they love. Although there is good part of jealousy but that will only happen if you know how to handle it. [Read; How to overcome jealousy in romantic relationship]

Really the emotion behind jealousy is so powerful that it will lead you to anger and anger can lead you to something else like fighting, shooting someone or some other thing you’d never wished.

Enough of that, let get to know how you should handle competition from other guys when you’re dating hot woman, putting insecurity and jealousy as explain above in consideration.

What I’m trying to let you get here is that, you must get over jealousy and insecurity issue and know that, there is nothing to be intimidated about.

Other guys will only have whatever power you give to them to hit on your hot woman. So, don’t give them any power by acting insecure and jealous around her.

There you have the answer, how you should handle competition from other guys when you’re dating hot woman.

Do you have any contribution, comment or questions? Please feel free to make use of the comment form below for all your contribution and don’t forget to share this post with any of the social media icons below.

1 thought on “How You Should Handle Competition From Other Men”