It was a remarkable night on Sunday 25th February, 2013 for Daniel Day-Lewis  who made history as the first person to win Oscars award for the third time. No one has ever won it before, the closest were people who have won it twice but three times nobody until now when Daniel Day Lewis became third time luckiest. 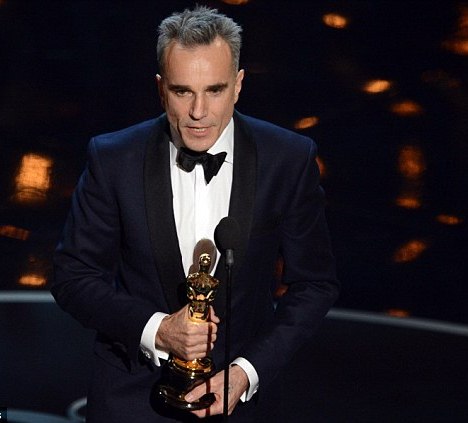 Daniel Day Lewis won the first Oscars award in 1990, about 23 years ago, he won it for “My Left Foot”

The second Oscars Daniel Day Lewis won was in 2007, seventeen years after the first award, which is six years ago, he won it for “There will be blood”.

The third Oscars award for Daniel Day Lewis which set him on the part of history, Day-Lewis was praised for his humorous acceptance prize upon winning for his role in Steven Spielberg’s Lincoln. The awards that help him make history as the only actor that have won Oscars award for three times

The British-born star took home the Best Actor prize for playing the title role of Abraham Lincoln in the biopic Lincoln – making it the third time he has taken home the prestigious award.

Accepting his prize, Day-Lewis, 55, said: ‘I really don’t know how any of this happened. I do know I’ve received much more than my fair share of good fortune in my life.