Territorial behavioural adaptation is exactly what cinematic MRI reveal when used to view a pregnant woman womb. Twin fighting in the womb does not stated today, it has started for long time ago but it is now that evidence about it is out. Cinematic MRI reveals the footage of twin fighting in the womb. The video is everywhere now on the internet should if you care to view the video. 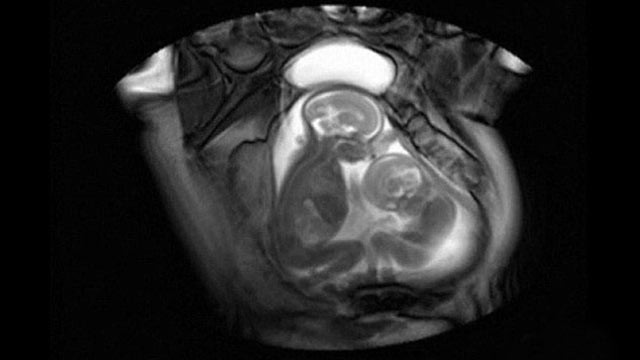 In the cinematic MRI footage, it shows the legs of the smaller of the two foetuses extending into the space of the larger foetus, as if trying to push it back or kick at it, this is a kinkd of territorial behaviour we learnt in our biology, although we’re not sure of exactly what is going on between the foetuses.

According to iScience report, “Never before have internal interactions between foetuses been observed by doctors and scientists with this much depth or clarity. The implications of this groundbreaking development could change the way that we diagnose the health and behavioural well-being of single foetuses or the pairs of them belonging to lucky parents,”
The cinematic-MRI is use magnetic resonance imaging to string together moving images from inside the body. Cinematic MRI does not use radiation which is why it is safer for the foetuses than the CAT scans that uses radiation in its procedure.
The video comes from a study aimed at diagnosing a rare but increasingly more common condition unique to identical twins. Called twin-to-twin transfusion syndrome, the condition causes the twins’ blood flow to essentially become interconnected. One baby inevitably loses out to the other, receiving less blood, and stops growing. The other baby then grows dangerously fast, putting it at risk of cardiovascular complications and premature birth.