Tonight blue moon is going to appear, although it may not actually appear blue to everyone except those that near the volcano, only volcanic ash and forest fire can turn the moon blue. You’re familiar with the phrases “Once in a blue moon” which we often refers to once in a while.

The naming arises because each Moon in a given season has its own name. This tradition of naming full Moons has existed for hundreds of years across many cultures. The names generally accepted today are those coming from the Farmer’s Almanac.
Friday will feature a blue moon, the second full moon of the month, an event that happens every 2.7 years, on average. (The next blue moon won’t occur until 2015.) 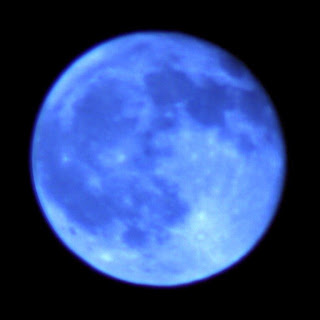 For instance, during the second quarter of the year, the Moons are named Pink (April), Flower (May) and Strawberry (June). However, should another full Moon appear during this quarter it would be called, by default, a Blue Moon. Since the third of the four full Moon’s in a quarter is called the Blue Moon, the order of Moon’s in the second quarter of the year would be Pink, Flower, Blue and Strawberry.
Since Blue Moons only occur about once every three years, it became becomes a convenient measure of a long period of time, therefore giving rise to the cliche “once in a blue moon”.
While the above is the generally accepted meaning for Blue Moon, a misunderstanding lead to a new definition being adopted that today is the more often quoted. In an article, “Once in a Blue Moon”, that appeared in the March 1946 edition of Sky and Telescope Magazine the author, James Hugh Pruett incorrectly stated that the Blue Moon was the name given to the second full Moon that appeared in any given month.
You Can Actually Watch The Blue Moon Online
The web-based Slooh Space Camera, which showcases live views from various telescopes around the world, is hosting a special broadcast of the blue moon on Friday, beginning at 6 p.m. EDT (2200 GMT). Slooh’s program will feature live shots of the moon from an observatory in the Canary Islands, off the coast of Africa, and views of the sun from the Prescott Observatory in Arizona. The dual feeds will treat viewers to simultaneous real-time observations of the moon and sun in true color, Slooh officials said.
The blue moon webcast can be accessed by visiting the Slooh Space Camera’s website here: http://events.slooh.com. Viewers can also tune in on their IOS or Android mobile devices, according to Slooh officials.
Source: From Foxnews
0
0
0
0
0