Beyonce New Hairdo Not Enough For Such Attention

At the Brooklyn Nets game over the weekend where Jay-Z which is the man in Beyonce life was watching the game between the team which he part own (Brooklyn Nets) playing the first game of the season with Toronto Raptors. The present of Beyonce with her new hairdo caused stirred among fans present at the game field.
It is a kind of blond hairdo, that makes her look different, no doubt Beyonce is a super star but why is her hairdo now making lots of noise. Other super star like Britney Spears and Demi Lovato have had such hairdo before, so it Beyonce hairdo now. 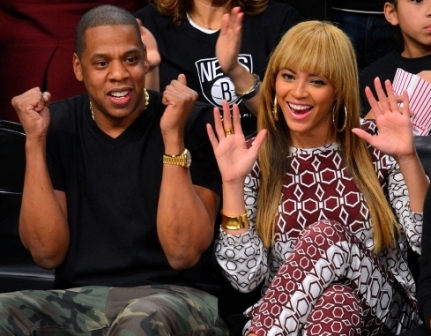 Beyonce which is 31 year old sat next to her husband Jay-Z and helped cheer the Nets with every ball possession. Brooklyn Nets won Toronto Raptors by 107 to 100. This makes Beyonce hairdo look like is just the right time to carry such hairdo on her head.

It is possible that Queen Bee’s new haircut is likely a signal she is filming a new music video or movie. Or maybe the new ‘do is her way of helping bring attention to her husband’s business venture.

She just recently gave birth to a baby where rumour has it that Beyonce has the whole floor in the hospital close-off so she could have her baby. Although it is believed to be a rumoured but if it’s actually true, it might be that she did not want paparazzi taking pictures of her baby until she was ready. Every woman deserves privacy during such time.

Let Beyonce hairdo be, it is her life, so everybody has the right to treat his or herself the way you want it. I personally don’t see anything wrong with her hairdo, it is just another way to draw attention from the media or what do you think?

1 thought on “Beyonce New Hairdo Not Enough For Such Attention”