Skip to content
After emerging Grand Slam number one (No 1) in the just concluded U.S Open, Andy Murray is set to propose to Kim Sear his long time girlfriend. Both of them have been together since 2005 although split temporarily in 2009 but reunited just in a few months latter.
This week the Scottish tennis ace become the first male British tennis player to win a Grand Slam final since 1936 and now Andy is ready to focus on his personal life. 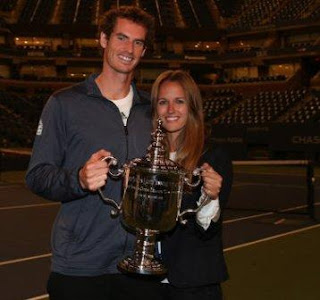 According to information we got from yahoo new today; Sports psychologist Roberto Forzoni, who has worked with Murray, said it would be a natural move for the pair.
“It would not surprise me in the least to see him marry Kim now,” Forzoni told the Mirror.
“She has brought him calmness off the court and helped him to settle down; she is the rock behind his success. She is someone Andy can really rely on, she has always been a shoulder for him to lean on in the hard times.
“She is now enjoying the best time of his life with him. They are a perfect match.”
Any wedding would also have the support of Murray’s mother Judy, who has described Kim as the ‘best thing that ever happened’ to her son.
Andy Murray is now 25years old while his girlfriend Kim Sears is 24years old, at the peak of his career now, it is the best time for him to settle down with his long time girlfriend and we believe that this will be a perfect union for both Murray and Sears.
0
0
0
0
0