Guys don’t always have plan about how their wedding or married life will look like until they have found the right lady, unlike ladies, who in many times prepare how they would want their big day to look like when they have not even find their MR right.

When a man get into relationship, it often takes him time (years) before he pops up the question of will you marry me, this is a kind of frustration to lots of ladies especially if their biological clock is fast running. 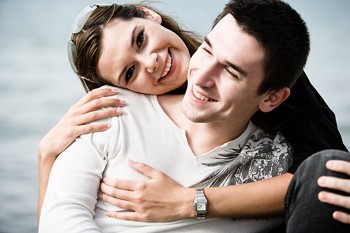 I wouldn’t blame any woman for wanting it as fast as possible inasmuch as she sees a man as someone who has future plan for her. But the key thing here is patience, as a lady; learn to endure with him while watching these 7 clear signs from him.

If you’re not getting them, chances are he’s not going to be the ideal man for you and then you’ll need to talk to your legs and run from him before he let your biological time run down completely and at the end of it; you’re not getting married to him.

Here are the 7 clear signs you should look out for in a man to determine if he has a future plan with you or not.

1. Future talks always on his mouth

If a man wants to settle down with you, he will always talk about future plan with you. He’s already seeing you as his wife and he need to practice how to communicate as a family and not an individual entity anymore.

2. He put you into consideration before getting his new apartment

Once you’re in a man’s mind as a future wife, he will contact you and put you into consideration and with your approval for the kind of apartment he wants to move into. Since he knows that, you’re going to leave there together, he put you into the consideration, before getting the apartment in an environment you’ll love to live with him

Yes, a man does restrain himself from using ME often when discussing some important issues with you, he’ll instead use WE because, he’s seeing you and him as a team instead of individual. Whether is talking about the future or the present, when he uses “WE” instead of “ME” is always a good sign for you. He has you in him mind as his future partner.

4. When all his friends are getting married.

5. Your opinion is never ignored

If you’re in a relationship with a man that value your opinion and treat you with respect, you should count yourself lucky because, this is one of the important signs that any responsible and not too far from getting married man shows to their future partner.

You opinion couldn’t have been counted more often if he just want to flings with you and not ready to commit to any future plan about getting married to you soon.

6. He brings up talks, hinting on kids

If you hear your guy talking about the kids you’ll both have even when he has not ask you directly to marry him, that should be a good sign that he has something good coming your way very soon. Talking about kids may not be the regular subject but when he lay more emphasis on it whenever he brings up topic relating to kids, then, that’s a sure sign you need to take hold of. He has plans to spend the rest of his life with you.

7. He stay with you when the going get tough

No matter the circumstances you’re going through, if a man stand by you, then such man should not be ignored. It shows it’s never going to be rosy all the time, tough time too will at some times surface in marriage but his ability to stay with you now shows that he loves you, he care for you and he’s ready to see you’re happy knowing fully well that, you’re going to be his. He’s here to stay for a long term with you.

Sure, these 7 clear signs that he plans spending the rest of his life with you, might not be everything you need to watch out for in your potential husband but they help you to consider which way you’re heading to with a man you’re in a relationship with.

Do you have other clear signs you think should be included here?

Please feel free to share your thought; I’ll appreciate it a lot. Use the comment form below for your contribution, comments or questions if there’s anything you want to get further clarification about what you’ve just read here.